Here are pictures of some moonbat bumper stickers I have run across in the Washington, DC area. They are all over the place. I just happened to have my camera when I saw these.
This first one alludes to the fear of the 'Police State'. The blue and yellow sticker is the logo for the Human Rights Campaign (for lesbian, gay, bisexual and transgender equal rights). The HRC was wholly onboard the John Kerry for president bandwagon to the point that they were very anti-Bush and Republicans in general. Before I really did not care about their activities, but their behavior during the 2004 election has turned me tone-deaf to anything they have to say. It was their aggressive tactics on the streets of DC that rubbed me the wrong way. (Note: The HRC sticker by itself is not a sign of moonbattery.) 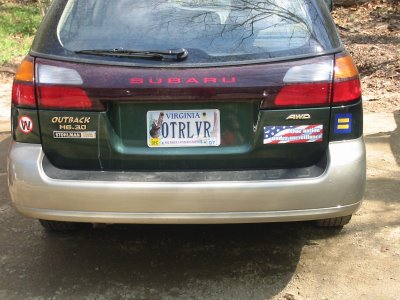 Here is another moonbat fearing the upcoming 'police state'. 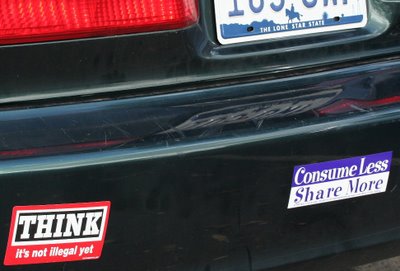 The sad thing about people like this is that they don't like the way that I think and they have no interest in thinking about all these moonbat conspiracy theories that are out there. Take all the idiotic 9/11 conspiracy theories. Some of the theories even contradict the others. None of them stand up to any reason. This car had Texas plates. Cindy, that you?

This next one must be a really small group. The organization apparently no longer exists and the website is just a placeholder with a bunch of generic ads in case anyone bothers to look them up, generating a little income for the moonbat who started the group in the first place. (DON'T LOOK UP THE SITE, it's full of spam ads.)

For those who don't know, a 'birder' is a bird watcher. Of course Bush was a 'threat' to birders because his administration is such a threat to nature..... Blah, blah, blah. 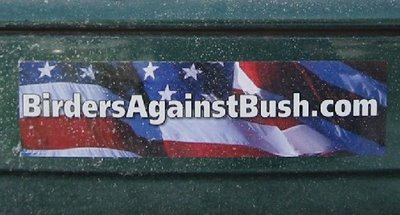 Like the first car above, this car also has the DC-popular 'no w' sticker. There is also a Kerry sticker. Surely, Kerry must be pro Birder right? 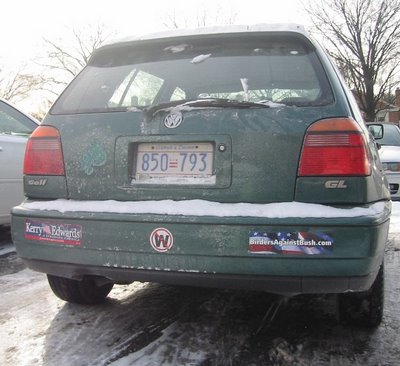 Of course he is. At least through the sights of a shotgun. 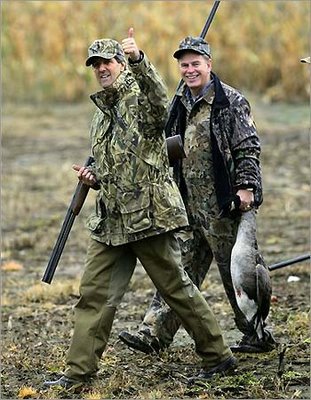 This next one is typical DC: 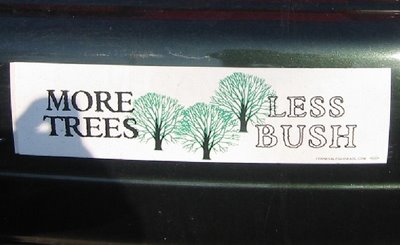 Lets not forget who really controls the White House. Does it surprise anyone that this liberal is driving a SUV? Contactors ripping off the Government = BAD. Killing the environment as you drive to a protest sponsored by a liberal group in your gas guzzling SUV = GOOD. 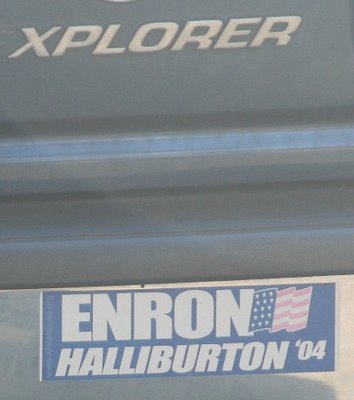 'Teachers Against Bush.' No surprise here. Looking at the state of DC schools, they should take any help they can get. Might it be that they were against Bush because he was pushing them to do work? OK, the teachers are not fully to blame for stupid children. The parents are partly to blame. And which party has no interest in preserving family values? I think it is the party the teachers are for, if only to give them an excuse for why their students can't read and write. (Yes, there are some very good teachers out there. Then there is the mass of moonbat teachers feeding our children liberal BS, when they should be teaching them to read and write. They should all keep politics out of the classroom.) 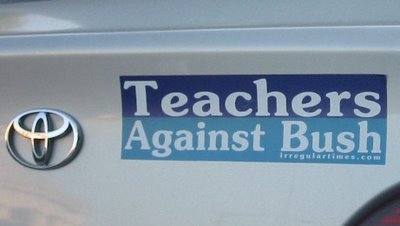 This next sticker is probably the most idiotic of them all. Like the Peace Corps could have prevented the 9/11 attacks. I could be wrong, but first someone has to explain to me how sending young outspoken liberal women into muslim lands, telling locals how to do things, is going to work against Islamic terrorism. As far as we know, it might have been the threat of feminist Peace Corp workers that most threatened these terrorists into attacking us. If only they were issued burkas.

Whoever this person is, they are bringing discredit on the Peace Corps. Go here to read what the Peace Corps does. Fighting terrorism is not part of their mission.

This last one is not a bumper sticker but I just had to include it. It's one thing to put these lunatic stickers on your car, it's another thing to put a sign like the one below in your front yard. Apparently, the problem is who is doing the screwing. Clinton screwed us all too, but apparently it was OK when he did it. 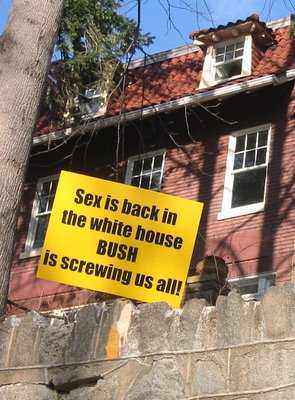 Send me your moonbat bumper stickers and I will add them to the gallery.

Why are the left's conspiracy theories so complicated? - 06 June 2006