Here is a consolidated map of visitors to FFI on the 19th of December. 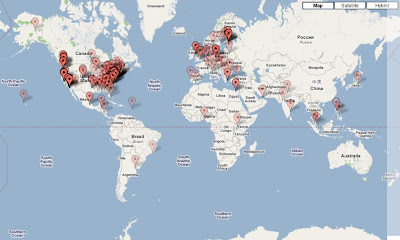 First, I am very thankful to receive so many visitors. Take a good look at the pattern on the map. Most visitors are coming from the first-world. Sure, there are no visitors from Australia marked on this map, but I know that there are people in Australia who regular read FFI and according to my Stat Counter, Australians are #4 in visitors to the site. (Thanks much!) But look at Russia and China. They are two huge black holes. Africa and South America are not that much better off. But I know that I do get more visitors from Africa than I do from Russia. Than again, half the visitors from Nigeria end up here because they are looking for information on the Rose Household Textiles scam. (Hey Nigerians, ask the guy on the computer next to you about it!)

Now some may be thinking that the lack of visitors from some parts of the world might be due to their home languages not being English. Well that is certainly possible and most likely a symptom, but lack of access to the internet is probably as big a problem. But let's think about the language problem. Maybe the inability to speak English is keeping the third-world stuck where it is. (We will forget about those third-world countries that do use English.) Take this from a story about the richest Muslim in India:

A Muslim school a half-hour's drive from Mr. Premji's Bangalore home reveals the chasm between this globalist success story and the country's Muslim masses. Students sitting cross-legged on the floor of the Masjid e Takwa madrassa spend their days memorizing the Quran in Arabic -- a language that neither they nor their teacher understand.

The classes are taught in Urdu, a tongue that's largely confined to Muslims and uses the Arabic script. There is no science in the curriculum. Neither is there English, the language in which Wipro conducts business and interviews job applicants, as it looks for Westernized staff who can deal with international customers. - Wall Street Journal

This is an education that is setting up children to fail. Educations like this are the reason why no amount of effort manages to lift the third-world from the hole that it is in. Throwing money at this problem is not going to fix the situation, unless the money is used to take the children away from their parents and put them in schools that teach them how to read, write and understand math, and teach them English as well. (It is suggested that Russian President Putin has stolen over $40 billion from his country. Why should we replace that money? Not only that, the Russian Government is swimming in money. Money is not the problem, convincing Russia and other third-world Governments to invest in their populations is.)

There is no reason why there should be two worlds. Unfortunately, until the UN gets down to addressing the root causes, this is not going to change at all.

How a Muslim Billionaire Thrives in Hindu India - WSJ
- Google News Search linking to the full article, in case you get a preview view through the link above.