Traffic on the Useful Idiot Highway to Syria

Lets start with a Wikipedia definition of what a useful idiot is just so that we are all on the same page:

In political jargon, the term "useful idiot" was used during the Cold War by anti-communists to describe Soviet sympathizers in western countries (particularly in the United States) and the alleged attitude of the Soviet government towards them. The implication was that the person in question was naïve, foolish, or in willful denial, and that he or she was being cynically used by the Soviet Union, or another Communist state. The term is still in use and used more broadly to describe someone who is perceived to be manipulated by political movement, terrorist group, or hostile government, whether or not the group is Communist in nature. - Wikipedia

Next, we now have a number of Members of Congress rushing off to Syria to ask Syria'a President Bashar al-Assad to help us stabilize Iraq. Senator Bill Nelson of Florida was the first to get on the highway and beat all the traffic for his heart-to-heart with one of the biggest reasons why there is instability in the Middle East. (Senator Nelson Provides Syria with encouragement to continues destabilizing the Region. - AFP)
Here are some comments about his trip from the White House:

WASHINGTON (AFP) - The White House sharply criticized a US senator's trip to Syria "not helpful" and "not appropriate" and warned Damascus not to see the visit as an indirect overture from Washington.

"Even lending a further specter of legitimacy to that government undermines the cause of democracy in the region," spokesman Tony Snow said after Democratic Senator Ben Nelson met with Syrian President Bashar al-Assad.

"The Syrians have been adventurous and meddlesome in Iraq, and in Lebanon, and working against the causes of democracy in both of those countries," Snow said. "It's absolutely vital that the democracies succeed in both places."

"And therefore, the Syrians should have absolutely no doubt that the position of the United States government is the same as it has been," he said, as US President George W. Bush bucked pressure to discuss Iraq with Syria. - Yahoo News

If I was President Assad, the first thing I would get from this meeting is the confirmation that my actions are having the desired effects. The second thing I would get is that, for some reason, Democrats see me as some sort of partner-in peace in solving the 'middle east crisis' or if they think I am to blame, they will never say to in public, especially since they can't say it in a private meeting. So at least in the short-term I could even increase my efforts, like in toppling the Government in Lebanon while at the same time rearming Hezbollah. This will also provide more to talk about when you greet your next Democrat Senator arriving off the useful idiot highway. Senator John Kerry.
Senator Kerry took a detour to Egypt, just to make sure that his trip did not fall in the shadows of Senator Nelson. I look forward to seeing the photo of the meeting. For those who can't wait, here is a photo from the last meeting in January, 2005, when Kerry was one of the last Senators to visit Syria in an attempt to foster dialog. 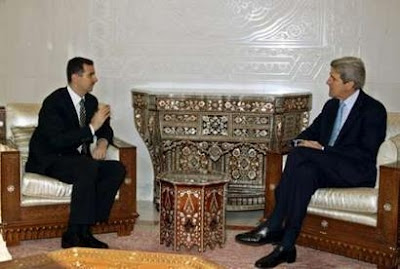 (Dances with Dictators: Kerry looks to pass the 'Global Test' on Iraq.)
I guess Kerry considers Assad one of those foreign leader friends he alluded to during the 2004 elections. With friends like that, it's good that he is only a Senator. Of course the good Senator is taking some heat for going to Syria. So here is his explanation why the trip is a good idea:

"It's important to engage in some kind of discussion," added Kerry, on a nine-day tour that also includes stops in Egypt, Iraq, Lebanon, Israel, and the West Bank.

"It's important to ask questions, to probe, and to get a feel for what the dynamics are, and I'm confident that I can share those with the administration." - Boston.com

I wonder if the Senator bothered to get a briefing on how Syria is destabilizing the region before he headed off. Did he bother to probe the reasons why the US thinks Syria is a destabilizing factor? My guess is that he ran off to Syria without a clue of why we consider Syria a problem. If meeting with Assad is such a good idea, then why not meet with former members of the Iraq Regime still hiding in Syria. I am sure they too have ideas on how to stabilize Iraq. Maybe he will ask the Army while he visits Iraq today. Then again, looking at the pictures of the visit, probably not.
Traveling with Senator Kerry is Democrat Senator Dodd of Connecticut. That is a odd move for Senator Dodd as he is considering a run for President in 2008, and a picture of him sitting with Assad is hardly a vote-winner, especially if it turns out that Syria is 'convicted' of the assassination in Lebanon currently being investigated by the UN or implicated with directing the fall of the Lebanese Government which recently resulted in the assassination of a member of Parliament.
Senator Arlen Specter is currently the only Republican on the useful idiot highway. Here is how Senator Specter reasons that a trip is in order:

Specter says the situation in Iraq is so dire that it is time Congress step up to the plate and see what it can do. He says he and other Republicans are concerned that the administration's policies in the Middle East are not working.
The visit, coming on the heels of a trip by Florida Senator Bill Nelson, would be a direct affront to the White House. The United States has limited diplomatic ties with Syria because of its support for Hezbollah and Hamas, which the U.S. deems terrorist organizations. - WHPTV.com

I doubt that any of the Senators will bring up Hamas or Hezbollah during their meetings. After all that would hardly be conducive to generating constructive dialog. This is why we currently have limited contact with Syria, because they have already been delivered the message to stop assisting these terrorist groups. So far they have declined to respond. But now, they have some members of Congress they can call on to defend them the next time the White House wants to turn the screws on Syria.
And that only does harm to the US and those people that these Senators claim to represent.

Victor Davis Hanson has thoughts about Iraq and includes the following about the rogue Senators circumventing official foreign policy:

Nota bene: Senator Nelson just returned from talking in Mr. Assad’s Syria—the serial murderer of Lebanese reformers, the clearinghouse for Hezbollah, the refuge for the killers of Americans in Iraq—with assurances that Syria wishes to be a stabilizing factor in the region.

Sen. Kerry in Cairo just praised Hosni Mubarak, lauding him by chastising President Bush’s failure to listen to this voice of reason and his criticisms of the United States. And why not listen to such advice, since this autocrat has been the recipient of billions in American aid, while squelching all reform for some thirty years in the bargain?

No doubt Kerry also lectured Mubarak about once hyping the WMD threat (“Mubarak lied, thousands died?”). Remember, the Egyptian strongman, as part of his reservations about Iraq, had warned our generals that American troops would be targeted with gasses of all sorts by Saddam.

Kerry also called for new talks with Iran—a rogue state presently in the middle of uranium enrichment, supplying IEDs to the militias in Iraq, promising to wipe out Israel, and hosting a Holocaust denial love fest in Teheran. Surely if the senator once denigrated our own soldiers as terrorizing Iraqis he can at least say that Iranians do the same? - VDH

I don't understand why this is so difficult. Dialog just encourages them to act bolder. See the YEARS of useless negotiations the EU3 endured in a useless attempt to stop the Iranians from continuing their nuclear bomb program. Even the Iranians admitted that it was just to delay talk of sanctions.

Senator Kerry has had his meeting with President Assad of Syria. 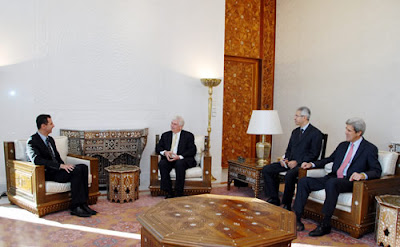 (AP Photo/Sana)
Makes you wonder who is keeping their distance from who? It sure looks like they were getting ready to have a productive meeting.
Now take a look at this picture. Just how much did this trip actually cost. I figured that he would either be traveling first class or even borrowing the wife's jet. But no, he stuck al of us with the bill. In the series of pictures is a number taken while Kerry was touring the old district. So was all this just some lame excuse to get a taxpayer-paid Christmas shopping trip? 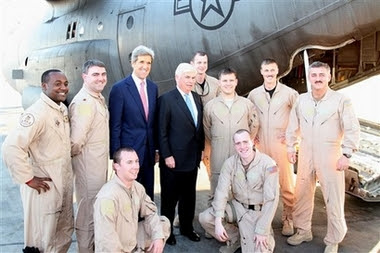