Is Darfur SO BAD that President Bush is their only hope?

The Eurocrats and Democrat Elites have long criticized President Bush for being too much of a cowboy and a blunt straight-talker, which is not compatible with working through the 'Diplomatic' UN and those who walk its halls, needing to be stroked and made to feel important just to get them to act on anything. This 'friction' existed well-before the invasions of Afghanistan and Iraq.

Ambassador John Bolton is the latest casualty of the snubbing of the President's foreign policy both at home and abroad. So it is pretty damn odd that the Save Darfur Coalition has been running an ad campaign pleading for Americans to ask President Bush to act on Darfur. From the website's faqs:

Why is the Coalition calling upon President Bush to help make sure UN peacekeepers are sent immediately to Darfur? Shouldn’t that be the UN’s responsibility?
The recent television ads sponsored by the Save Darfur Coalition asking President Bush to take the lead in pushing for the deployment of a UN force in Darfur are not meant in any way to “bash” the President, but rather to urge him to follow through on the good work he and his Administration have already begun. We are both cognizant and appreciative of the fact that the President has done more for the people of Darfur than any other world leader. In fact, it is because of his leadership thus far that we direct our pleas to President Bush now. The hard truth is that the United Nations does not have a standing army it can choose to deploy, it must instead rely on its member states to do the hard work necessary to actually deploy a peacekeeping force once that force has been authorized. As the strongest of member states, we believe that the United States, under the President’s leadership, must lead the international effort to raise and deploy that UN peacekeeping force. While we are not calling for U.S. troops in Darfur, we are calling for the strong U.S. leadership necessary to ensure that a capable UN force is raised and sent to Darfur as soon as possible.
It is also worth noting that while these ads running in the U.S. call for stronger leadership from President Bush, similar ads being run internationally call upon various international leaders to provide strong leadership as well. Advocacy directed at President Bush is not the sum total of our advocacy efforts, but is in fact only the U.S. directed portion of a larger international advocacy campaign directed at the top echelon of world leaders. - SaveDarfur.org 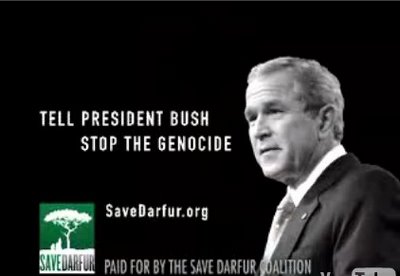 From one of the print ads: (View pdf) 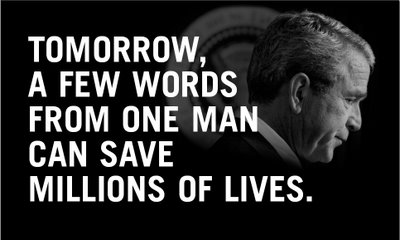 It is nice to see that people still put faith in the President. This is both a credit to the President as a leader as well as a clear damnation of the UN and the UN Human Rights Council, which theoretically should be the global Human Rights watchdog. Instead it spends it's time condemning Israel while ignoring else in the world including even those who Israel is fighting against, like Hezbollah. Even the UN Secretary General has complained about their blind eye when it comes to crimes against humanity.

Some groups contend the new UN Council might be even worse than the discredited Commission on Human Rights that it replaced.
They say the Council has become obsessed with the Israeli-Palestinian issue to the near exclusion of the vast majority of the world's human-rights violators.
Since the Council was inaugurated in June, it has held two special sessions dealing with the situation in the Gaza Strip and one special session on the Israeli-Hezbollah conflict in Lebanon in August.
Even UN Secretary-General Kofi Annan, who pushed strongly for the creation of the Council, says it should broaden its focus and look at as many situations as possible.
"Whether their meetings coincided with the Lebanese war, or not, they have tended to focus on the Palestinian issue, and of course, when you focus on the Palestinian-Israeli issue, without even discussing Darfur and other issues, some wonder what is this Council doing? Do they not have a sense of fair play? Why should they ignore other situations and focus on one area?"
Some countries have severely criticized the 47-member Council for condemning Israel four times, while not taking up human-rights violations in countries such as Myanmar, North Korea, and Sudan.
The President of the Council, Mexican Ambassador Luis Alfonso de Alba, rates the work of the Council as fair.
"I would not say good. I wish it could have been much better." - Voice of America

How bad is that when even the President of the Human Rights Council rates it's work as poor. (Would you call a self-rating of 'fair' as good?) Of course, the other main UN body, the UN Security Council, is not able to act because any relevant actions against Sudan will reliably be stopped by China, whose veto was basically bought in exchange for Sudanese oil. The Russians can also be expected to prevent any action using their we will not do anything that may lead down a path to war excuse, made popular in attempts to act against Iraq, Iran, North Korea, etc... (their obstructionist actions most likely bought as well.) Which brings us back to Darfur.

So what are the people suffering genocide to do? They can't go to the Europeans. They have a history of failing to act, combined with a failure to even be taken seriously. (Like during the EU3 negotiations with Iran.) They surely must be desperate to ask President Bush for help. When the US helps, it often results in lots of bombing and targeting of the subject country's leadership, with an 'accidental' embassy bombing thrown in for added effect. Yes, those fighting to save the people in Darfur must be very desperate. Take this from the coalition's print ad:

We have seen the haunting pictures, heard the cries of grieving mothers.

Mr. President, you can end it tomorrow when you speak to the United Nations and the world. You need only stand up and say that the United States and its allies will take decisive action now to protect lives in Darfur. That the United States, and the rest of the world, will move now to deploy the UN force they've already approved. In America the support for action crosses partisan lines. John McCain and Barack Obama, Bill Clinton and Bob Dole support taking action now.

Please, Mr. President. Beyond politics, beyond borders, beyond religion, there is the moral imperative to save lives. Mr. President, the world is waiting. The lives of two million people hang on your every word tomorrow.

Please don't let them down.

I wish it were that easy. If the US were to act, it would be acting mostly alone, other than a few other honorable countries that would participate. The UN would not be part of the process for change other than to quickly point any and all embarrassing aspects of the operations. Europe might provide peace keepers, but they would come with so many limiting caveats as to render them useless. Those against the President at home and abroad would then deride whatever 'coalition' the President did manage to put together. Then once American peace keepers start taking casualties there would be a huge uproar for US troops to pull out regardless of the mess that would be left behind. And finally, we can expect a reprise of 'No Blood for oil' and as a bonus, American action in Darfur would provide further evidence that the US is at war with islam as it is the muslims that are doing the killing in Darfur.
So why don't we all get comfortable with the fact that those in Darfur are screwed.

Sad, isn't it. Even sadder will the the usual finger-pointing after the fact as to why nothing was done and the standard 'we can never permit another Darfur' empty proclamation from world leaders.

Note: I am in favor of the UN in Sudan doing what it takes to stop the killing in Darfur and action to charge the leaders of the Sudanese Government with Crimes Against Humanity.

Update: 6 December 06
Here is a short summary of current US action by the President:

US – economic sanctions re Sudan - On October 13, the United States enacted the Darfur Peace and Accountability Act of 2006 (H.R. 3127) imposing economic sanctions against certain senior officials of the government of the Sudan responsible for genocide, war crimes, and crimes against humanity in the Darfur region. Upon signing the legislation, President Bush issued Executive Order 13412 blocking property and prohibiting transactions by United States persons with the government of the Sudan. The statute provides, among other things, that the President should take all necessary steps to deny the Government of Sudan access to oil revenues, including by prohibiting entry at United States ports to cargo ships or oil tankers engaged in business or trade activities in the oil sector of Sudan or involved in the shipment of goods for use by the armed forces of Sudan. The function of denial of entry has been assigned to the Secretary of Homeland Security. Persons subject to US jurisdiction should exercise caution so as to avoid inadvertent violations of this law. (10/13/06). - Holland & Knight

It is a start, but hard to do it alone. Why are not other countries doing something similar?