Today is the anniversary of the attack on Pearl Harbor, and the United States by the Empire of Japan. 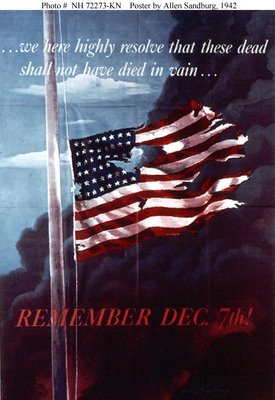 We should all remember the attack as well as the events that lead up to it. The US was in negotiations with Japan over other actions that the Japanese were taking in Asia. The talks were nothing but a diversionary tactic as the plan had always been to attack US Forces in the Pacific, instead of a backup-plan in case the negotiations failed. In effect, they were negotiating in bad faith.

It is fitting to remember that now, with the Iraq report suggesting that the US should talk to Iran and Syria as part of creating a more stable Iraq. Part of the reason Iraq is unstable is because of Iranian actions. Just how is talking to them going to help the situation. The three years of negotiating with Iran over their nuclear program has gotten the EU3 nowhere and Iran that much closer to a nuclear bomb. And that is barely recent history. The suggestion is even more confusing when you take into account what Iran has been saying. Is anyone in Washington, DC even listening to Iran? They are not exactly projecting the type of atmosphere that is conducive to any useful talks. Of course it would be in Iran's benefit to talk with us. It would give them the opportunity to demand that the US make changes to permit their operatives a freer hand in Iraq while at the same time telling the US to go F-themselves whenever the nice, US negotiator inquires about their nuclear program.

Of course, the US could tell the Iranians that failure to play ball will result in bombs dropping from the sky or the targeting of Iranian leaders, or a blockade, or sanctions, but thats not going to happen, isn't it.