While the Democrats drone on about the US listening in on international phone calls made by suspected terrorists without warrants, perhaps they should expand their 'terrorist protection agenda' to include those crossing into and out of the US:

A man was arrested at Detroit Metropolitan Airport after officials say they found him carrying more than $78,000 in cash and a laptop computer containing information about nuclear materials and cyanide.

Sisayehiticha Dinssa, an unemployed U.S. citizen, was arrested Tuesday after a dog caught the scent of narcotics on cash he was carrying, according to an affidavit filed in court.

When agents asked him if he had any cash to declare, he said he had $18,000, authorities said. But when agents checked his luggage, they found an additional $59,000. When they scrolled through his laptop, they said they found the mysterious files. - BreitBart

This was all done without a warrant as he was returning to the US and of course Customs has a free hand with everyone coming back to the US. It gets better:

At a court hearing Wednesday, Dinssa was ordered held in custody until at least until Monday at the request of prosecutors.

Assistant U.S. Attorney Leonid Feller argued Dinssa was a potential risk to the community and federal agents want to get a warrant to search his computer more thoroughly, The Detroit News reported Thursday. U.S. Magistrate Donald Scheer approved Feller's request to detain him.

Dinssa, who is from Dallas, arrived in Detroit from Nigeria by way of Amsterdam and was headed for Phoenix, Feller said. He is charged with concealing more than $10,000 in his luggage, which carries a maximum penalty of five years in prison, the Detroit Free Press reported. - BreitBart

So now that he has been identified as a possible threat or criminal (He lied and was caught with undeclared cash.) they will obtain a warrant to go completely through his laptop and hold his ass in jail until they better understand what he was up to. So the system works as it should.

No mention on whether he was a muslim or not. Nigeria does have a substantial muslim population and chances are good that he has some connection to more radical elements of the Nigerian muslim population based on three facts; he is unemployed, was caught with larges amounts of cash, had in his possession documentation about nuclear materials and poison.

So why is this important? Well instead of bringing back the files on a computer, he could have faxed it back or explained the relevant parts of the documentation via a phone call. Currently the US can snoop in on international calls without a warrant. The Democrats want to change that. While they are at it, why not just require warrants for each of the millions of people coming back to the US if the Government wants to search them. Of course that's ridiculous, as is requiring warrants for international phone calls, faxes and mail.

There is now additional information from Little Green Footballs:

Oddly enough, the AP wire story leaves out some important facts; namely, that he was born in Ethiopia, and that he had just spent four months in Nigeria: Airport arrest turns up nuclear info.

And even more oddly, not one of the news agencies thinks we need to know his religion. - Little Green Footballs

I am going to go out on a limb and bet that this guy was up to some terrorist related activities. Lets see how quickly the muslim community comes to his defence. At least he is looking at five years in prison for the hidden cash. That's a good start.

Someone thought this story was important enough to email it to a person in Nigeria. The real interesting part is that they used a Satcom link to check out the post. Just who in Nigeria uses Sat communication? Might it be the same type of people who hand out tens of thousands to 'unemployed Americans'? There was a real interest in the story here, they wasted 5 minutes on it. (OK, unlikely, but possible.) 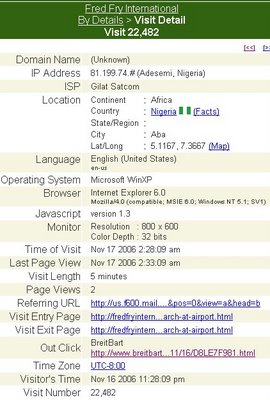 Signs That Allah is Not on Your Side

Here is a link to view the Official Criminal Complaint.
Posted by Fred Fry at Thursday, November 16, 2006

I am not American, so I am not privy to the subtelties of the US judicial system, but I believe that your example shows all too well the perfect sense of using warrants. The system works fine WITH warrants. Why remove the protection a warrant gives to avoid unlawful action of the police. Even in the best of societies, police is infortunately sometimes tempted to act beyond the rule of law or to abuse its power for personal interest... US police is not exempt of this kind of temptation as History has shown it already. It seems to me very sensible to request a warrant to do anything as heavy as depriving someone of his/her liberty. And I don't see how it would hamper the fight against terrorism.

Would you like to wait every time you entered the US for a warrant to permit Customs to search your bags?

The system is setup to permit ease of flow of people across the boarder. If there was no risk of an inspection, then everyone would be smuggling something. Even in Finland, Customs nees no warrant to search your things, and they need to, I have been on the ferries from Estonia, watching old men stuff liquor bottles in their pants to smuggle it back.

There is no reasonable way to handle 3+ million people who may need to be searched. Also keep in mind, that othing haapens unless your caught BREAKING THE LAW, as is the case here. Nobody forced him to leave or come back. He already knew that it was possible that he would be searched. That is part of traveling, which he accepted when he left the country.

Oh, Thanks for your comment! Made me think about this a little more!

Well, I agree with you 100% about the customs. They don't need any warrant (in Europe too, by the way) and I believe it is fine. First for the practical reason you mentionned, and secondly because of the simply higher probability of catching someone at a border, a bottleneck per definition. It is for the police that I believe we should always have a warrant. Now, of course, a warrant should not be something stopping the police to do its much needed job, but only to make sure that an independant mind is there who can check on the police work if needed. At least, that is my feeling about this...

Yes, I agree that in general police need to get a warrant. Of course, there are exceptions like if the police or other are in imminent danger, and when they are arresting someone already, so to search the person and their car, etc...

With that, I think it is completely unreasonable for the courts to disregard damning evidence due to some technicalities.