Finally, one last day of electioneering before all hell breaks loose on Wednesday when the Democrat leadership has to explain to those that they sold a victory to just how they failed to pick up either house of Congress despite an 'unpopular' President and Republican Congress.

Either way, it's over as of Wednesday, until they start the race for President.

I will leave you with this piece of propaganda from a favorite store of mine, Patagonia:

Don't forget to vote on November 7

I can't really say that Republicans are worse for the environment than Democrats. It is kind of like being at the grocery store and the clerk asks "Paper or plastic?" What kind of choice is that? I can either kill a tree or damage the environment. Lets not give President Bush any credit either. He created the world's largest marine reserves off the Hawaii Islands.

Establishing the Northwestern Hawaiian Islands as a strictly protected marine reserve, which Bush is slated to announce this afternoon, could prove to be the administration's most enduring environmental legacy. The roughly 100-mile-wide area encompasses a string of uninhabited islands that support more than 7,000 marine species, at least a fourth of which are found nowhere else on Earth.

The islands include almost 70 percent of the nation's tropical, shallow-water coral reefs, a rookery for 14 million seabirds, and the last refuge for the endangered Hawaiian monk seal and the threatened green sea turtle. The area also has an abundance of large predatory fish at a time when 90 percent of such species have disappeared from the world's oceans. - Slate

Both parties do both good and bad for the environment. Members of both parties have been busted for driving to and from Eco events in SUVs only to hop into a hybrid just around the corner from the events. Many of them are too lazy to walk short distances instead opting to burn more gas. Unfortunately, there is little talk on actually making our use of energy more efficient, which is the best, easiest way to reduce our need for foreign oil.
Then there are the terrorists that the Republicans are fighting. I bet that suicide bombers are bad for the environment. So the republicans are helping in that way as well.
Back to the article above. The worst part is the photo. Their bias is showing. I am not outraged. I am paying attention, but I take it that I am not paying attention the way they want me to. So thanks Patagonia for calling me a stupid dumbass and environment killer. Thanks much. I feel so good about buying your products. I wonder how many more conservatives who got your message and feel the same way I do. Did you get any feedback? I bet you did and I bet others were not as considerate as I am here.
The real shame here is that Patagonia puts out these great catalogs with wonderful pictures of nature. They could have gone positive and used one of them. Instead they took a protest picture and went negative. That's too bad.
I will leave you with a picture of a downy woodpecker that I took last week while bird watching. See, conservatives can appreciate nature too! 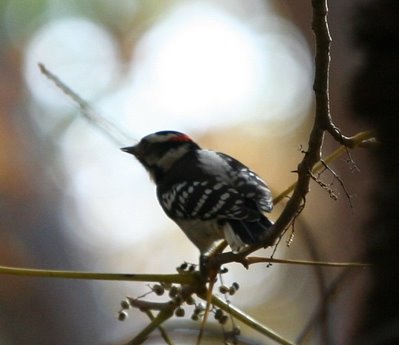