Strong Argument for the Death Penalty

In the ongoing Lebanon saga (really Hezbollah saga), we now have the (criminal) leader of Hezbollah, Hassan Nasrallah, declare that the two kidnapped Israeli soldiers that they hold will not be released until Israel releases a Lebanese prisoner that they are holding.
Hezbollah has always claimed that their kidnapping was done as an act to force Israel to release Lebanese prisoners that they hold. (Israel claims to be holding only three) This was also not the first time that they have done this, the last time in 2003, when they traded the bodies of three soldiers that they kidnapped and then murdered in 2000 for over 400 prisoners. However, their actions are centered around freeing only one Lebanese prisoner, Samir Kuntar (Qantar).

Hezbollah's leader has said two Israeli soldiers held by his group will only be released if a Lebanese militant held by Israel for 27 years is also freed. Hassan Nasrallah said that any deal with Israel would have to include Samir Qantar, convicted of several murders after a cross-border raid in 1979.

The capture of two Israeli soldiers in July sparked a month-long conflict. - BBC

For starters, Israel has good reason why they have held Samir. He took part in a raid into Israel where a number of Israelis were murdered, including by Samir himself. The BBC article pretty much white-washed over important details of the murders, so here is a better description as found in Wikipedia:

After taking the hostages, Kuntar's group took Danny and Einat down to the beach, where a shootout with Israeli policemen and soldiers erupted. Samir Kuntar shot the father, Danny, at close range in front of his daughter in the back and drowned him in the sea to ensure he was dead. Next, he smashed the 4 year old girl's head, Einat, on beach rocks and crushed her skull with the butt of his rifle. - Wiki

Four-year old Einat's younger sister also died, smothered by their mother in an attempt to keep the child from making noise and revealing their position to Samir's terror group. Initially, he was to receive the death penalty, but for some idiotic PC (politically-correct) reasons (to not upset Egypt ) he was not, receiving multiple life sentences instead. That has been an unfortunate mistake as Israel has since lost a number of soldiers in the terrorist's attempts to gain his release. If only he was executed years ago, then his imprisonment would have stopped being an issue years ago.
An execution is forever and nothing Hezbollah could do would ever bring him back.
This is something to think about as the US gets ready to bring a number of terrorists now being held in Guantanamo Bay, Cuba.
This is also a perfect example of how you cannot negotiate with terrorists. Israel has been pushed to comply with the UN mandated cease-fire. Part of the cease-fire called for the immediate release of the captured Israeli soldiers. Nasrallah's refusal to release the kidnapped soldiers is just a little more proof that you cannot negotiate with these animals and that the UN did Israel a disservice by stepping into the middle of the fight.

At what point are we going to learn that our kindness (and our compassion) is going to get us all killed? We really need to change the way how we fight these people.

Update: 13 September 2006
Today's NY Post has this example of the US still being PC when dealing with terrorists. The most amazing part of this story is that the frustration of the military members who were prevented from taking out some terrorists was made public:

WASHINGTON - Taliban terror leaders who had gathered for a funeral - and were secretly being watched by an eye-in-the-sky American drone - dodged assassination because U.S. rules of engagement bar attacks in cemeteries, according to a shocking report. U.S. intelligence officers in Afghanistan are still fuming about the recent lost opportunity for an easy kill of Taliban honchos packed in tight formation for the burial, NBC News reported. - NY Post

As if the Taliban (or Hezbollah) have rules of engagement.

Further Update:
Here is a pic of taliban gathered for the funeral: 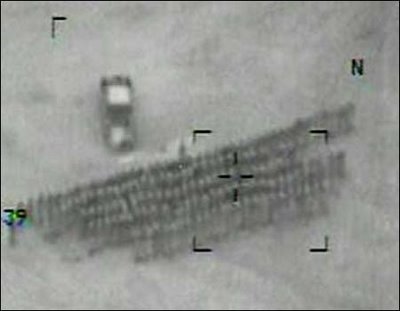 As found on Confederate Yankee.