Ah, Finland. The worker's paradise. At least this is the BS that I was exposed to for years while living there. One advantage that Finns use as evidence is that employees are protected from their employers, especially when it comes to termination. It is not so easy to get fired in Finland, and in many cases, there is a union who will come to your defense. The lack of such 'protection' in America is something that my Finnish friends see as against the worker. This is a standard comment:

'In America you live under the constant threat of being fired.'

Well that is true to a degree. In Virginia, you can get fired on the spot.

Virginia is an employment-at-will state; this means the employer may terminate any employee at any time, for any reason, or for no reason. As a general rule, therefore, the employee has no right to challenge the termination. There are a few very limited exceptions. For example, an employee may not be discriminated against or terminated because he has filed a safety complaint or exercised his rights under OSHA law.Virginia Code § 40.1-51.2:1. Also, federal law protects employees from discrimination because of age, race, sex, religion, national origin or handicap. - VA DOLI

However, this also means that you can quit at any time for any reason. At my present company, for every person that has been fired, at least two have quit. In most cases this has been to take a higher-paying job elsewhere. I recently had an employee go out to lunch and not return. She did give notice that the following day would be her last, but apparently changed her mind. She was a great employee until the day she left. (I did get a reference request from her new employer as part of her security clearance application, but I just filed it in a drawer. So, while you can walk out, it is better to leave on good terms, if you ever need a reference.) At any rate, even though a company can fire you, it still needs to replace you. Fire too many people and the company will earn a bad reputation and nobody will want to work for you. A low unemployment rate also makes replacing employees a bit difficult. (There are other reasons why an employer wants to limit employee turnaround.)
So, back to the worker's paradise. Seems that thousands of nurses are learning that while there is little risk of getting fired, it is not so easy to quit either. The contract for specialized nurses who work in the southern part of the country is up for renegotiation. The nurses are looking to collect on past promises for better wages and so far don't like what they are being offered. In the past, when they went on strike, they were required to continue staffing the hospitals at a minimum level. This of course lessens the impact of striking (to the benefit of the employers) and surely must have burnt out the nurses who were forced to work. At least, they are still bitter about their past treatment.
This time around, many of the nurses had had enough. They decided that if their demands are not met that they don't want to continue working for unsatisfactory pay. Also, by resigning, they won't have to continue to work while on strike. Over twelve thousand nurses have submitted their resignations for November 19th. However, they might be wrong about being allowed to quit:

The Finnish government submitted a proposal to Parliament on Friday for legislation that would keep part of nurses at work, even if the intended industrial action threatened by the Union of Health and Social Care Professionals (Tehy) starts on November 19th.

Minister of Health and Social Services Paula Risikko (National Coalition Party) calculates that the bill would exclude no more than approximately ten per cent of the 12,700 nurses who have signed up for the mass resignation campaign.

According to some parliamentary sources, the proposed bill states that the hospital districts could start already today - Friday - making lists of the units and numbers of nurses who would be excluded from the industrial action under penalty of fines. - Helsingin Sanomat

So the Government is planning to force the nurses to keep working (10% of them at least) even though they intend to resign. Just to keep them in line, they will threaten the workers with fines for failing to work, and for following through with their intentions to quit. This is kind of what the Soviet Union did. They had a 'Hooligan' Law which was kind of a catch-all to keep the workers in line. Sure, there was the promise of 'work for all'. But what you did not hear was that you could have ended up in the gulag just for being late to work. Nice eh... 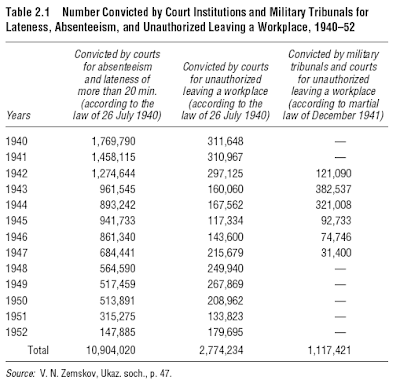 It will be interesting to see how this develops, especially considering that the nurses are employed by the local Governments who in turn get part of their funding from the State. The solution to this problem is money, but Finland has public health care, so at the end of the day it is tax money that funds the whole system. Worse, if they get the raise they are demanding, then other workers will also want to collect on previous promises.

Note: I did not address the issue of the risk to the population if the nurses quit the hospitals. It is a real risk that people might die. However, that is not a reason to infringe on their right to quit their job. And not for anything, I would expect that the nurses know exactly the implications of what they are planning. After all, they see patients in need every day. Also, there is another issue here in that nobody is going to want to become a nurse in Finland if they get bullied around, and there is already a shortage of them, partly because of the poor pay. Being part of the EU and Nordic countries, they can go find work elsewhere, like Sweden, where the pay is higher.

I read things about how socialism "works" in Europe and other places, and it really scares me. I run into more and more people that honestly belive that it is a better system, and that we in the United States are somehow EVIL for not adopting more of it.

Personally, I think the problems we *do* have here are because we've adopeted too much of it already. But it seems that the answers to the problems socialism causes is always more socialism.

Obviously not all of our problems here are not caused by socialism. But it seems to me that socialism causes a lot more problems than it fixes.

Union protection & the likes only works if you happen to be one of their members. Yet, until a few years ago, foreigners could not even join. Then, eventually, they enlarged this to allow people with a permanent resident permit or who is an EU citizen. However, the caveat is that the Immigration can preemptively bypass all that by simply canceling an existing residence permit or by refusing someone a new one. Then, there's nothing the union can do to save your job.

ahaa, so this is the post in question.
I am not entirely sure how much you presented here is true because I don't really follow news. But I can say this, that it was a really scary period. HUS, Which is the thing that governs the university hospitals in Helsinki, invaded our school with banners and cheerful representatives trying to lure the students into working for them.

I write this with such a negative light because that is exactly how it was. They knew that We would be their last hope if 12700 of their specialized nurses resigned. Luckily most of the students stood their ground and made agreements with the teachers and tehy that they wont replace the nurses that resigned. I still don't actually know what to make of the whole thing...it all seem so surreal and bizarre. Thank goodness no one had to suffer or die as a consequence to these actions.