While Russia has been very concerned about what has been going on outside it's borders (Most likely because that is where they hide their money) they have been completely ignoring a huge number of problems within their own country.
One of them is about to turn into a global catastrophe. It is the issue of nuclear waste. In this case nuclear waste from Soviet Submarine reactors:

Andreyeva Bay, also known as Installation 928-III, is the largest storage facility in the Northern Fleet for radioactive waste, particularly spent nuclear fuel. Although the storage facility was built in the 1960s, is in need of modernization, and is inaccessible by rail, it remains operational.
Reportedly, 21,000 spent fuel rods (equivalent to about 90 nuclear reactors) are stored in three concrete containers, which have been filled to capacity since early 1990. As a result of the termination of spent fuel transportation to Mayak in 1997, new deliveries of containers of spent nuclear fuel are stored at Andreyeva Bay out in the open and unprotected. TK-11 and TK-18 containers, storing 35 spent fuel rods each, are located on the grounds of the facility and may potentially develop cracks and leak radioactivity. Thirty-two such containers, which have been stored in the open, are leaking radioactivity.
During the summer of 1998, the Norwegian government spent about $800,000 on a project to direct a brook into an underground channel so that it would not run near underground pools and containers storing radioactive materials. Since 2002, Norway, Sweden, and the United Kingdom have initiated assistance projects for Andreyeva Bay. - NTI.org

Well, that does not sound good. It gets worse:

The vast amount of radioactive waste that is the legacy of Russia's nuclear-powered submarines has been known to be a looming environmental disaster - now it can be far worse.
Research now indicates that the enormous tanks holding discarded submarine fuel rods in the Andreeva Bay may explode at any time, creating a nuclear nightmare for Northern Europe.
Norway and other Western authorities have argued for years that the stockpile of highly radioactive nuclear waste on the Kola peninsula poses an environmental hazard to the local population and for Norway. - Aftenposten

The problem here has been that they have been arguing with Russia who really does not give a damn. That's why this waste is dumped in the far corner of Russia. 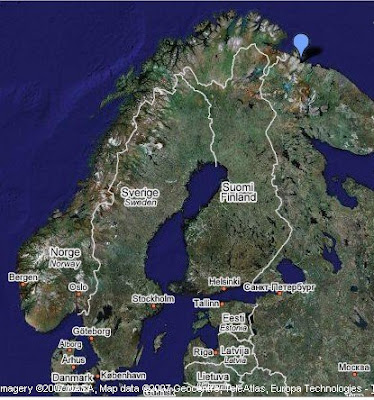 This radioactive waste is a growing threat because salt water has seeped in and is breaking down the waste, in effect concentrating some of it.

Anatomy of a chain reaction
As a consequence of the concentration of salt in the water (some 1500 milligrams per litre) and chloride (some 400 milligrams per litre) holding the spent fuel elements at Andreyeva Bay, the fuel itself is degrading into small granules and particles.
According to the scientists who wrote the report, a chain reaction will occur when the concentration of fuel particles reaches 5 to 10 percent.
The shedding of fuel particles in stationary conditions occurs slowly. However when fuel casings are unloaded, the shedding can drastically increase. The time it take for a mixture of particles to reach 5 to 10 percent the total volume of fuel waste held in a container is not able to be calculated, meaning it could happen very slowly or very quickly – a literal game of Russian Roulette. - Bellona

That last paragraph is disturbing in itself as it means that the very act of cleaning up the site might be the trigger causing the accident. How is that for a damned if you do, damned if you don't situation. 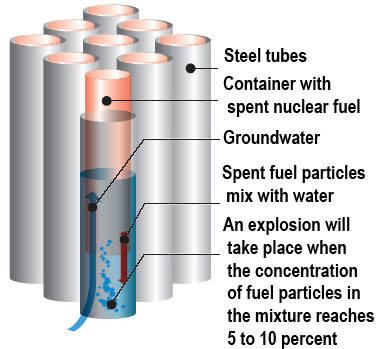 One would expect Europe to be up in arms over this mess in Russia. However, they are too busy dumping their own nuclear waste there.

It is known that since 1996, from 130 to 290 tons of depleted uranium hexafluoride has been shipped annually to АЭХК for enrichment under contracts with the Dutch/German/British company Urenco and the French company Eurodif SA.

Ecologists assert that “enrichment of uranium tails” is just a covert method for bringing nuclear waste into Russia: after enrichment, only 10% of the nuclear material is returned to Europe, while 90% remains essentially stored for free in Russia. - Robert Amsterdam

One could say that Russia's acceptance of their nuclear material is some sort of bribe against Europe pushing them to resolve this issue. This is not to say that the West is not trying. Millions is being allocated by Western Countries and the United States (Which paid for the decommissioning of the KURSK submarine) for the purpose of securing and cleaning up Russia's Soviet nuclear mess. However, the Russian's are in the driver's seat and our concern has yet to translate into action on their part. It just might be that nature is about to force their hands.
Andreyeva Bay, Russia - Google Maps
Andreyeva Bay is a ticking bomb, Bellona’s documents prove - Bellona
Norway concerned about possible nuclear explosion at Andreyeva Bay - Bellona

We consider it necessary to bring to your attention information about the situation that has come to pas with the storage of spent nuclear fuel (SNF) at Andreyeva Bay located on the Kola Peninsula 100 kilometres from Murmansk and 45 kilometres from the Russia-Norwegian border.
An emergency situation has developed with the aged storage facilities for SNF at Andreyeva Bay, which in the opinion of scientists, could lead to a spontaneous nuclear chain reaction. The storage facility holds some 32 tons of SNF, which contains 22,000 spent nuclear fuel assemblies. According to research carried out by scientists, these spent nuclear fuel assemblies, which have been kept in alarming conditions for about 25 years, are degrading, decaying, and nuclear fuel in the form of small particles create in the water in which the assemblies are stored a homogenous mix in which, under certain circumstances, could cause a spontaneous nuclear chain reaction.
According to Rosatom estimates, and uncontrolled chain reaction, the maximum effective radiation does expected to hit the area's population at the boundary of the of the sanitary protection zone of 100 metres – in the worst imaginable weather conditions taken into account – will not exceed 40 microsieverts in the first year after the accident. This dose is two times as high as the acceptable contamination level.
In Bellona's opinion, these estimates are impossibly optimistic because there is no guarantee that an explosion in one storage compartment will not trigger an explosion in a neighbouring compartments, which could result in 20 million Curies worth of fallout released into the environment, contaminating both huge sections of the territory Russia and surrounding states, including Norway.
According to Rosatom plans, work will be carried out to remove the SNF. This project will be carried out over the next 15 years, which in Bellona's opinion is completely unacceptable.
The crisis condition of the storage facility and the SNF stored there demands urgent measures aimed at liquidating the emergency situation, correcting plans and deadlines for removing the SNF and the application of effective technology.
Dear Mr. President, we are turning to you, the highest ranking official in the Russian government, in accordance with the Federal Law “On the use of atomic energy,” to decide on questions of caution and liquidation of the consequences of emergency situations during the use of nuclear energy, and to adopt necessary measures for the liquidation of emergency situations concerning spent nuclear fuel at Andreyeva
Bay.

Clearly, President Putin does not give a damn about his legacy if this is the type of mess that he plans to leave behind, just like all the Russian and Soviet leaders before him.