Welcome to this New Years Day Edition of Maritime Monday.

This Weeks Photos:
The ROKIA DELMAS has been aground for a while off the French Coast. Initial hopes were that the vessel would be refloated, but after being aground for over a month it has now been declared a total loss. In order to remove the vessel, they first need to offload the cargo, which is a painfully slow (and dangerous) process when done at sea.
So here are a couple pictures from the 'Prefecture Maritime del l'Atlantic' gallery covering the salvage operation of the ROKIA DELMAS: 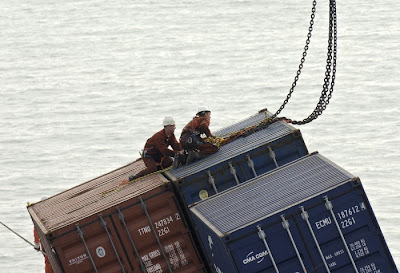 More photos in the Gallery.

Eagle Speak has coverage of the sinking of an Indonesian Ferry with over 600 persons missing. (Keep in mind that International Maritime Agreements do not automatically apply to a country's internal maritime traffic. Even the US has Inland and International/Offshore certifications. So keep in mind that the ferry you board in Greece or the Philippines (or elsewhere) may or may not be up to International standards.)
The Scotsman (UK) has the story of a fishing vessel skipper who sank his vessel over ten years ago as part of an insurance scam, who recently found God and confessed his crime. He was rewarded with over two years in prison.
National Public Radio covers the dispute between lobstermen and divers who collect lobsters. More on the dispute at Boston.com (Why does it seem unfair to the lobsters to let divers simply pluck them off the bottom, or out of traps as the lobstermen claim.)
MarineLog has "Distinctive Ships 2006" 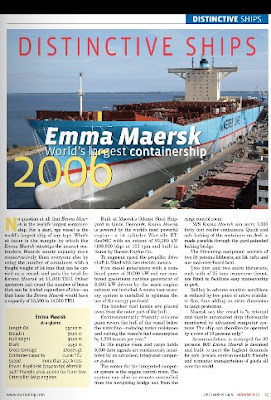 The Mariner's Museum in Newport News Virginia notes the upcoming opening of the USS MONITOR Center. The US Navy summary of the Civil War vessel can be found here.

Scandinavian Shipping Gazette has an introduction to Wallenius Wilhelmsen's newest PCTCs (Pure Car truck Carrier); the AIDA and the OTELLO.

Sailors, Mariners & Warriors League has joint training between the US Navy's USS COMSTOCK and the Canadian Navy's HMCS OTTAWA in perfecting their visit, board, search and seizure training while operating in the Persian Gulf.

The Stupid Shall Be Punished has video of a torpedo strike on the HMAS TORRENS. (Just another example why merchant sailors and subs mix just like oil and water)

Patagonia's 'Oceans as Wilderness' Campaign notes the reauthorization of the Magnuson-Stevens Act (MSA), the primary law governing fishing in U.S. waters. The post also includes a video on bottom trawling. I have this post that notes how incompetent the EU has been in trying to save their fisheries.

Molton Eagle has questions concerning the four submariners who went overboard from the USS MINNEAPOLIS-ST. PAUL as it left Plymouth harbor in the UK, resulting in the death of two.

Maintoday.com has an editorial about problems with the Coast Guard's Deepwater modernization program.

The International Herald Tribune has Norway's problem in dealing with U-Boat U-864 which was sunk off Norway during WWII with a cargo of mercury.

The Marex Newsletter covers the US Coast Guard's decision to abandon plans for live-fire training on the Great Lakes. (Don't complain when we later find out how much money the Coast Guard will need to spend to get their sailors to a location where they can practice firing weapons from floating platforms.)

Naval Open Source Intelligence has word that a full half of the UK's Royal Navy will be mothballed/laid-up/taken out of service.

Cruise bruise has the aborted port calls at Grand Cayman for over 18,000 cruise passengers due to rough weather, including photos and video.

The Daily Mail (UK) has the story of Michael Perham, a 14 year old boy who is currently sailing across the Atlantic in search of the record for youngest solo crossing. Despite his dad trailing in another sailing vessel two miles behind, this has to be one of the biggest examples of irresponsible seamanship/child endangerment of the year. Here is a link to the page of companies who thought it was a good idea to sponsor this idiocy. Am I being too harsh? Where do you draw the line? After all, you only die once. Take this from the Times Online:

After battling waves as high as a house, sailing through shark infested waters and braving hurricane force winds, Perham, from Potters Bar, Hertfordshire, is expected to sail into Nelson’s Dockyard, a harbour on the Caribbean island of Antigua on Tuesday morning, some seven weeks after setting off on the 3,500-mile journey from Gibraltar. - Times Online

Lets not forget that it is hard to maintain a proper watch if the only person onboard is asleep!

The Navis.gr website (Greece) has over an hour of 'Safety at Sea' training videos, including how to launch a lifeboat and liferaft. (Note: I have not had time to look at these, but they appear to be a good assortment of topics.)

The UN's International Maritime Organization (IMO) website appears to be infected with a virus/malware. (The sidebars no longer load.) 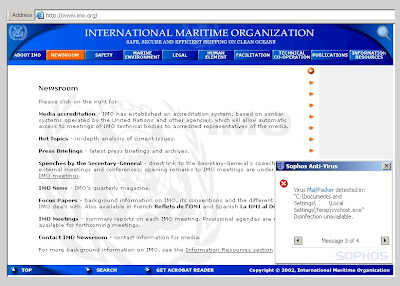 I can now never say that the IMO has done nothing for me. I did not link to the side for obvious reasons.

P&O clean-up satisfies Vanuatu - PORT VILA - 21 December – P&O Cruises, the Carnival Corp subsidiary, may not face a demand for compensation because of the proactive way in which it responded to cleaning up the 500,000 litres of oil waste that was illegally dumped in Port Vila, Vanuatu. The incident, which occurred last month, involved the cruise ship Pacific Star. P&O Cruises and the Vanuatu authorities have been holding regular meetings to discuss the issues but it has been agreed that P&O is doing all it can to clean the dump site and minimise the impact of the material. However it is expected to take between three and six months to complete the task. P&O has called on environmental experts from New Caledonia to secure the area and pump the waste into liquid holders for safe storage prior to being treated on site. - Fairplay

Anger at EU call for crewing shake-up - Britain shares doubts with maritime unions over European proposal for an ‘alternative certification’ - By David Osler
THE European Union is pushing for rule changes that would allow ratings to undertake many tasks traditionally reserved for officers.
The plan, which has been strongly condemned by shipping unions, seemingly opens the door for “alternative certification”. Ratings would then be able to take on such functions as operational navigation and cargo handling and stowage.
Some 27 countries — the existing 25 members together with Romania and Bulgaria, who join on January 1 — have tabled the proposal at the International Maritime Organization. The document is also signed by the European Commission, which has observer status. [Note: Since when do Observers sign anything? Sounds like they are taking a position. They better be careful or US States will want to play the same game!]
It forms part of the review the working of the Standards of Training, Certification and Watchkeeping convention.
However, Lloyd’s List has learnt that, despite having signed the document, Britain openly shares some reservations with the maritime unions. The crux of the issue is item “5.9” of the document, headed “alternative certification”.
It states: “At present the existence of dual purpose officers [Note: an officer with both deck and engine licenses] and general purpose ratings allows for horizontal flexibility in the manning of ships and the way the work is organised on board.

“However, there is also a need to consider the possibility of vertical flexibility, where specialist and other functions can be more evenly distributed among the crew.
“Therefore the relevant provisions of the STCW convention and code should be examined in order to asses the need for adapting the pertinent provisions.”
The proposals have been considered by the maritime skills task force of the International Transport Workers’ Federation.
A strong majority of both officer and rating unions are said to have taken a political position against the move. Officers’ union Nautilus UK, formerly Numast, has claimed that STCW could be “hijacked” by shipowners seeking to reduce crewing levels.
It fears that the rules will be diluted in response to the shortage of skilled seafarers.
Nautilus UK general secretary Brian Orrell said: “The proposals clearly present the potential for a diminution of the officer profession by enabling ratings to function as watchkeepers without the full certification of officers.”
Other effects could include a reduction in opportunities for junior officers, and less investment in cadet training.
In a surprise development last week, a spokesman for the Maritime and Coastguard Agency told Lloyd’s List: “The United Kingdom does not agree with this particular phraseology and has sympathy with the union’s position. “This particular paragraph is being read by the union as meaning that a partly trained rating could keep a navigational watch of some description.
“Although the UK and Nautilus would not take this position, this is indeed the position of some of our European colleagues, including the Netherlands.”
The spokesman argued that Britain had signed up primarily to facilitate discussion.
The IMO review of STCW starts next month and is due for completion by 2008, and the EU paper is just one of many that will be considered as part of the review process.
Other issues that may be considered, according to Nautilus UK, are working time rules, certificate fraud, medical fitness standards, mandatory alcohol limits, electrical engineering and electronics training requirements and the qualifications of yacht crews. - Lloydslist

There is a global shortage of trained seafarers, especially officers. Europe, especially the UK and Germany were trying to figure how to encourage more people to become trained as Merchant Marine / Merchant Navy Officers. Thanks to STCW 95, officer positions have been divided between Operational (Third and Second Mate Deck, Third and Second Assistant Engineers (or fourth and Third Engineers) ) and Management Level (Chief Mate and Captain. First Assistant/Second Engineer and Chief Engineer) positions. This proposal would blur the distinction between the Operational / Officer Level and the Ratings / Support Level.

Maybe someone should tell the EU that support-level Ratings are not required to learn navigation and they can earn their rating with only one year of sea service, of which only two months of which needs to include watchkeeping / standing watch on the bridge. (Per TESDA in Philippines.)

This proposal is just crazy. One group that will appreciate this is the now-unlicensed Indian Officers who were sailing with licenses issued by Panama who lost their jobs because Panama refused to issue STCW 95 Licenses to those who had Panama Licenses issued by passing a Panama exam and no national license that they could endorse. (Makes you wonder what kind of test they had to pass)

One open issue that still has to be addressed is the simple fact that STCW does not recognize or even have a rating for Able Body Seamen which was somehow vertically integrated into the Ordinary Seaman Rating. There is also no such thing as a Bosun in STCW 95.
Submissions for future editions:
Please submit articles for inclusion in next week' edition using the following submit form at Blog Carnival. You are also welcome to email photos for inclusion in future editions as well as suggest area of coverage.
** Sponsorship **
Send me an email (address in the sidebar) if you would like to sponsor an edition of Maritime Monday. I accept money and gear.
Previous Editions:
Here or click on the label below 'MaritimeMonday'.