Being More Green by Being More Efficient! (Electricity Flow, 2005) 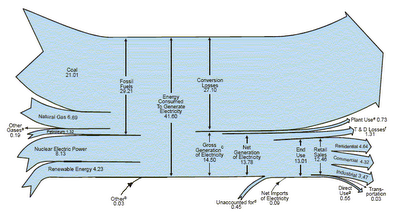 At the bottom, you can see the flows to Residential, Commercial, and Industrial. Notice how the three are dwarfed by that big arrow on the top right labeled ''Conversion Losses." What exactly is conversion losses? Take this explanation from the report:

Most of these losses occur at steam-electric power plants (conventional and nuclear) in the conversion of heat energy into mechanical energy to turn electric generators. The loss is a thermodynamically necessary feature of the steam-electric cycle. Part of the energy input-to-output losses is a result of imputing fossil energy equivalent inputs for hydroelectric, solar, and wind energy sources, since there is no generally accepted practice for measuring those thermal conversion rates.

The conversion losses are almost equal to all the coal and natural gas used to generate electricity. That is a huge amount of waste! Go ahead, open it up and take a good look at that energy flow diagram. Now there's your Global Warming problem.

So technically, we can switch to nuclear and renewable energy, provided we can get a grip on the conversion losses. That is not going to happen any time soon, but at the very least, any improvement in the efficiency of power generation and transmission will result in either less coal used, or an increase in the amount of electricity we can generate for the coal that has been consumed. That means that older less efficient, polluting plants can be retired with much more efficient, cleaner and smaller power plants. The current coal process itself is so inefficient that it is in our best interest that the process be improved. Think about it. Two of every three tons of coal are wasted. If we must use steam turbines to generate electricity, then why not use nuclear since conversion losses in nuclear power plants do not contribute to global warming.

There is lots of talk about 'alternative energy.' Looking at the graph above, I would think the nation could drastically reduce its demand for oil and coal if we can reduce the amount of energy that is lost in the conversion process. How hard is it to improve efficiency? It can be easier than you think. Part of the problem is that it really has not been addressed in the past because the fuel was so cheap that it was much cheaper to just burn more coal than to improve efficiency. This resulted in no real serious effort to improve the process.

Since the current system is SO INEFFICIENT, it is possible to find all sorts of small ways to improve it. Luckily, the research on how to do this has already been done:

Advanced coal-fired, power-generation technologies can achieve significant reductions in CO2 emissions while providing a reliable, efficient supply of electricity. Significant improvements in reducing CO2 and other emissions have been demonstrated via efficiency improvements and cofiring of coal and biomass.

Achieving the efficiency improvements and reducing emissions must be accomplished in a cost-effective manner. While current power plant efficiencies are about 33%, increasing efficiencies ultimately to 60% or more will reduce CO2 emissions by more than 50% per unit of electricity. Future development of CO2 sequestration could reduce carbon emissions to near-zero levels. - US Climate Change Technology Program (Links to PDF Document)

Part of improving the efficiency of power generation will require new power plants. Other improvements can be applied to the existing infrastructure, such as making use of the waste heat that normally goes right up the stack as exhaust gas. In many cases heat exchangers or 'waste heat' boilers can reclaim some of that energy.

Some factories, like paper mills, are installing the technology to take advantage of the waste heat generated in their production processes to generate electricity as a side product, which in turn is used to power the plant.

A new power plant is very expensive, so that the improved efficiency must cover the cost of building the plant. Luckily, research is being done to improve the efficiency of power generation. This program is called Vision 21, the Ultimate Power Plant Concept.

Vision 21 is a futuristic energy concept unlike any power plant that exists today.

Under development by the Department of Energy's Office of Fossil Energy, the concept envisions a virtually pollution-free energy plant. Unlike today's single purpose power plants that produce only electricity, a Vision 21 plant would produce multiple products - perhaps electricity in combination with liquid fuels and chemicals or hydrogen or industrial process heat. It also would not be restricted to a single fuel type; instead, it could process a wide variety of fuels such as coal, natural gas, biomass, petroleum coke (from oil refineries), and municipal waste. It would generate electricity at unprecedented efficiencies, and coupled with carbon sequestration technologies, it would emit little if any greenhouse gases into the atmosphere.

So, before we all turn our backs on using coal, we should give using coal a serious look, especially the ways to make using coal greener.
Of course efficiency at the time of power generation is one way of being greener. Another way is to reduce consumption. According to EcoGeek, about half of the energy we use in out homes is used for climate control. So better insulated houses will result in reduced electricity demand. That reduction is carried over times two as a reduction on the waste side of the flowchart above. People should understand that. While turning off one light bulb sounds so insignificant, what the person is doing is really saving three times the fuel they think they are saving because they do not take into account the inefficiency of generating and transporting electricity. So while your in Walmart (or wherever) consider picking up a couple of energy-efficient light bulbs.

We can think about Being Green or we can Be Greener!

In order to insure energy and economic independence as well as better economic growth without being blackmailed by foreign countries, our country, the United States of America’s Utilization of Energy sources must change.
"Energy drives our entire economy." We must protect it. "Let's face it, without energy the whole economy and economic society we have set up would come to a halt. So you want to have control over such an important resource that you need for your society and your economy." The American way of life is not negotiable.
Our continued dependence on fossil fuels could and will lead to catastrophic consequences.

The federal, state and local government should implement a mandatory renewable energy installation program for residential and commercial property on new construction and remodeling projects with the use of energy efficient material, mechanical systems, appliances, lighting, etc. The source of energy must by renewable energy such as Solar-Photovoltaic, Geothermal, Wind, Biofuels, etc. including utilizing water from lakes, rivers and oceans to circulate in cooling towers to produce air conditioning and the utilization of proper landscaping to reduce energy consumption.

The implementation of mandatory renewable energy could be done on a gradual scale over the next 10 years. At the end of the 10 year period all construction and energy use in the structures throughout the United States must be 100% powered by renewable energy.

In addition, the governments must impose laws, rules and regulations whereby the utility companies must comply with a fair “NET METERING” (the buying of excess generation from the consumer), including the promotion of research and production of “renewable energy technology” with various long term incentives and grants. The various foundations in existence should be used to contribute to this cause.

P.S. I have a very deep belief in America's capabilities. Within the next 10 years we can accomplish our energy independence, if we as a nation truly set our goals to accomplish this.
I happen to believe that we can do it. In another crisis--the one in 1942--President Franklin D. Roosevelt said this country would build 60,000 [50,000] military aircraft. By 1943, production in that program had reached 125,000 aircraft annually. They did it then. We can do it now.
The American people resilience and determination to retain the way of life is unconquerable and we as a nation will succeed in this endeavor of Energy Independence.

Solar energy is the source of all energy on the earth (excepting volcanic geothermal). Wind, wave and fossil fuels all get their energy from the sun. Fossil fuels are only a battery which will eventually run out. The sooner we can exploit all forms of Solar energy (cost effectively or not against dubiously cheap FFs) the better off we will all be. If the battery runs out first, the survivors will all be living like in the 18th century again.

Every new home built should come with a solar package. A 1.5 kW per bedroom is a good rule of thumb. The formula 1.5 X's 5 hrs per day X's 30 days will produce about 225 kWh per bedroom monthly. This peak production period will offset 17 to 24 cents per kWh with a potential of $160 per month or about $60,000 over the 30-year mortgage period for a three-bedroom home. It is economically feasible at the current energy price and the interest portion of the loan is deductible. Why not?

Title 24 has been mandated forcing developers to build energy efficient homes. Their bull-headedness put them in that position and now they see that Title 24 works with little added cost. Solar should also be mandated and if the developer designs a home that solar is impossible to do then they should pay an equivalent mitigation fee allowing others to put solar on in place of their negligence.

Installing renewable energy system on your home or business increases the value of the property and provides a marketing advantage.

I am sure that the US will be making huge shifts towards alternative energy. As it is, Europe is complaining that one reason they cannot meet Kyoto goals is because all of a sudden the US is buying up all the alternative energy equipment. So it is on the way. People this winter who chose to use wind power are actually paying less for their energy than the rest of us.

However, I think it is unrealistic and more importantly not needed to switch over to 100% alternative energy. Sure coal is a fossil fuel, but the United States is the Saudi Arabia of coal.