Just imagine, an energy company announcing that profit has risen 29% on strong demand and there is no outrage from Congress? Well this is the good fortune of Archer Daniels Midland.

Profit in the corn processing division, which includes the manufacturing of ethanol, increased $41 million to $219 million for the quarter. The company also cited improved selling prices for corn starch and sweetener. ADM is among the biggest processors of soybeans, corn, wheat and cocoa and produces soy meal and oil, biodiesel, ethanol, corn sweeteners and flour, with more than 250 processing plants.

Not bad. I’ll have to take a closer look into this company’s stock (ADM). What is not mentioned above is that they also managed to increase the quarter’s operating profit by 46%! (PDF release) The Wall Street Journal also mentions the following concerning ADM and Ethanol.

It expects ethanol prices to rise in the next two quarters, company executives said during a conference call with analysts Tuesday. The company plans this week to ask its board of directors to take a look at building a second U.S. ethanol plant, to produce fuel from corn. The company said it expects that industrywide, U.S. ethanol capacity will increase from 4.5 billion gallons this year to 6.5 billion gallons over the next 12 to 18 months. - WSJ

According to this Fortune Article, US gasoline consumption is about 9 million barrels per day. To blend all gasoline used in the US to contain 10% ethanol would require 900,000 barrels of ethanol each day. This means that current US production can only cover about 4 months ethanol demand assuming that 100% of domestic ethanol production is used for blended gasoline with 10% ethanol. Four months would cover the summer months so theoretically the numbers fit, except that it takes a full year to manufacture the ethanol needed for blended gas. This leaves nothing for other uses such as E-85 that we are seeing adds for. (Live Green Go Yellow) E-85 is fuel which is 85% ethanol and 15% gasoline.

The US would need over 279 million barrels of ethanol a year to replace just 10% of current gasoline consumption with E-85. This does not take into account that E-85 gets less mileage than gas, requiring more E-85 to go the same distance with a gallon of gas, nor does this estimate account for any other needs, such as for blended gasoline, as well as other demands for ethanol. From the following chart, you can see that there are other demands for ethanol. 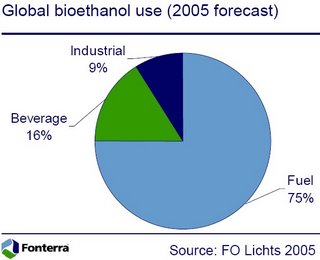 About 30 percent of the nation’s gasoline contains ethanol—and most of that is in the form of E-10 Unleaded. In some areas of the nation, ethanol is blended at rate less than 10 percent due to state-specific regulations. (On the other hand, some states are considering increasing the standard blend to 20 percent ethanol.) - Ethanol Facts E-10

These numbers mean that current domestic Ethanol production can barely meet domestic demand, explaining why ADM is interested in building a new ethanol plant. There is currently a need to import ethanol. Unfortunately, there is a 54 cent per gallon tax on imported ethanol. This equates to 5 cents per gallon of gas that includes imported ethanol.

Imported ethanol is most likely to be used near large ports, such as NY where there is high demand and shipping in imported ethanol is cheaper/simpler than moving domestic ethanol from the heartland to the coasts since it is not possible to move ethanol through existing pipelines. These areas also tend to have higher gasoline prices than other parts of the nation. Since we need to import ethanol, you would think that congress would be eager to repeal the import tax in order to provide relief to consumers. Think again:

"It's a step in the wrong direction," Sen. Charles Grassley, R-Iowa, said Friday. He is chairman of the Finance Committee, which would consider any change in the tariff. "It would send a signal that we're backing away from our own efforts to seek energy independence."

The panel's top Democrat, Sen. Max Baucus, D-Mont., also said that a change in the tax would be a mistake. House Speaker Dennis Hastert, R-Ill., whose state has the biggest ethanol producer, Archer Daniels Midland, also opposes a tax change.

If the administration tries to move on its own, says Sen. Byron Dorgan, D-N.D., whose state is another center of ethanol production, "they would run into a big fight in Congress." - Chron.com

Not only is our congress going after the oil companies, but at the same time they are going to sell out the whole country for some votes back in their home states. The silly thing is that there no need for protectionism. Just where is all of this foreign ethanol going to come from?

Take Brazil’s ethanol revolution which has been all over the news. Certainly they must be a threat to our domestic ethanol industry. Think again. Brazil produces about the same amount of ethanol as the US (5 billion gallons/year.) 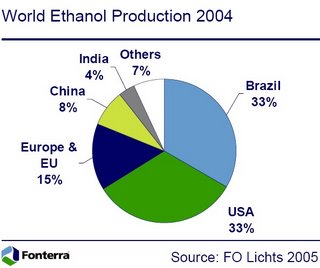 Just where does Congress think we are going to import all this Ethanol from?

Currently, about 13% of all corn grown in the US goes to ethanol production. The Department of energy things that the ability to produce more ethanol from corn is limited. There is plans to produce ethanol from other materials but that is still a couple of years off. The problem is Congress set the wheels in motion for increasing ethanol demand. The questions are, can increased production meet demand and will Congress sit on the sidelines while American users are gouged by the producers of ethanol?

I thought that the purpose of putting ethanol in gasoline was to help reduce our dependence on foreign oil. However, as Oxblog points out, Senator Durbin sees that including Ethanol in gasoline as a way of revitalizing the small-town America.

SEN. DURBIN: At this point in time, I tell you there is a boom now and opportunities for these ethanol production facilities. I want to see that happen. You know why? Because in downstate, small town America, that I represent as well, these are the best job opportunities they can find. These are business opportunities in communities that have otherwise almost given up. They have a chance now. And if you’re going to allow us to become, allow this import of fuel from Brazil we may find ourselves as dependent on foreign ethanol as we are today on foreign oil.

So we can partly thank Senator Durbin for the high price of gasoline as he sees ethanol in gasoline as a good way to subsidize small-town America. Not that farmers already get tons of subsidies as well as price protection. (i.e. sugar.) The joke is, farmers are always claiming that Government actions make their products too expensive to market. They receive Government money which results in overproduction. They then look to export their overproduction. The Government says "That's great, but you must use US-Flag ships to export the grain with." They then complain to their congressmen that the Government is driving them out of business. My question is, at what point did their business become uneconomical? How about at the point they asked for aid. Of course the requirement to use US ships is a way to subsidize US shipping. Funny how the farmers see it differently.

Note: This is part 1 of 3 concerning Gasoline, Congress and ExxonMobil. Keep in mind that I am currently an owner of a small portion of exxonMobil and BP.

I think that there are a couple of points overlooked by the American public in regards to the whole ethanol debacle. First of all, it was started as a means to provide price supports for struggling American farmers or that is how the legislation was originally framed. What went down is that it has become a price support for the American Farm Industry which looks nothing like "American Gothic". Another little issue, which the environmentalist seem to overlook is that ethanol reduces the miles per gallon by sometimes up to 17%. I saw this played out in real time when my aging minivan, which usually makes it to 300 miles and some change between fill-up only made it this week with the NEW ETHANOL ENHANCED fuel to around 275 miles. Yes, I know, I should have a hybrid or some more efficient model, but what these proponents overlook is that these cars are extremely hard to find and very costly when purchased. And there are some add-on issues such as few mechanics knowing how to work on these cars and a pending scare with fire and rescue teams as to the dangers incurred in an accident. As with any new model, the bugs haven't yet been worked out. In the meantime, I am wondering why there's all this public support for the "clean" fuel of ethanol, when in Denton Texas, they are making bio-diesel which can be run with little change in your average diesel engine and little has been reported outside of the Dallas area. The bio-diesel is made from used cooking oils that restaurants have to PAY to have hauled to a disposal site where it goes into the system. It's estimated that if even a quarter of the eating facilities in the DFW area participated, there would be MILLIONS of gallons of biodiesel. If I had the money, I would invest in one of these plants. It's a win-win deal. I personally would like to get a Jetta Diesel and run it off of biodiesel. Why are we wasting corn when we could be making fuel from waste?